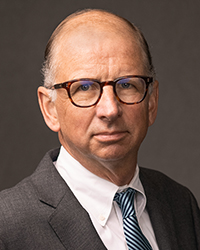 John North has focused his practice for over thirty years on complex litigation matters including intellectual property litigation such as patent, trademark, copyright, trade secret, and unfair competition matters including Lanham Act claims. John also has experience in patent licensing, patent portfolio strategy, pre-litigation counseling and inter partes review practice. John has effectively litigated cases in courts across the United States; he has been involved in complex matters for clients located across the world, including in Australia, Belgium, Canada, England, Finland, Germany, Israel, Italy, Spain, Switzerland and Taiwan. He has served as lead counsel in over 100 intellectual property disputes.

Clients have recognized John for his client focus, efficiency and savvy strategy advice. John’s recognitions include IAM Patent 1000 – The World’s Leading Patent Practitioners (2012-2023); and AV Preeminent Rating and Judicial Award, Martindale-Hubbell (1999-2022, 2016-2022 (respectively)). The IAM Patent 1000 2019 listing stated that “North has been called upon to represent clients across the globe in sophisticated litigation over his 32-year career and is known for producing positive outcomes in the most challenging of cases.”